Our offices are now closed. If you have a life-threatening emergency or urgent clinical need, please hang up and dial 911 or go to your nearest emergency department. For non-urgent issues, please click here for our After-Hours Frequently Asked Questions. If you need to request a prescription refill, please contact your pharmacy directly. You may also call us at 704-372-7900 to leave a general voice message or reach our after-hours answering service.

When Does Pollen Season End in Charlotte, NC?

Many people love spring because it means longer days, warmer weather, and the end of a dreary winter.  Except whenever you go outdoors, you start sneezing like crazy. Not only that, but your eyes get red and watery, your nose is runny, and you feel like you can barely breathe.

For many people, this is the reality of springtime. All those blooming plants and flowers mean pollen counts are especially high. If you’re in the Charlotte, North Carolina area, it may feel like pollen season will never end. You can’t shake your sneezing and congestion. What gives? Allow us to explain everything you need to know about pollen season.

What Is a Pollen Allergy and What Are Its Symptoms?

A pollen allergy may include reactions to weed, grass, and tree pollens. No matter which type of pollen gives you the sniffles, it’s often powder-like and yellow in color. Plants and flowers need pollen to grow and thrive, and it can be passed along through animals, insects, and the wind, whether knowingly or unknowingly.

The most common type of pollen allergy is ragweed, also known as weed pollen. At least 23 million people in the United States have a ragweed allergy. Ragweed is a plant with multiple species. In fact, according to the American College of Allergy, Asthma & Immunology (ACAAI), in the US alone, you’ll find 17 different species of the plant.

With a pollen allergy, you should anticipate symptoms like wheezing, scratchy or itchy eyes and throat, watery eyes, a runny and leaking nose, congestion in the face and throat, and sneezing. These symptoms are almost identical to those of a ragweed allergy. With that allergy, you may also have to contend with irritated eyes and headaches in addition to the above symptoms.

Pollen allergy symptoms will not typically begin until you are in an environment where the pollen counts are high. If you already have asthma, you need to be extra careful. Lingering in pollen-heavy environments can lead to wheezing and coughing.

When Does Pollen Season Typically Start and End?

In many cases, there is a season in which pollen counts are highest. These seasons vary depending on the type of pollen we’re talking about. For ragweed pollen, for example, the ACAAI says ragweed starts growing in August and may not stop until November. For grass pollen, you’re more likely to be symptomatic later in the season, from May to July, which is technically summertime. Tree pollen tends to be at its worst from March until the middle of May.

When Will Pollen Season End in the Charlotte Area?

It is worth noting that pollen season start and end dates can fluctuate depending on where you live. The climate and weather conditions play a major role in pollen levels and when plants sprout and grow.
In Charlotte specifically, you’ll see the differences from the pollen allergy season we outlined in the above section, with general seasons including:

In the next section, we’ll go into more detail on each type of pollen, the seasons, and considerations allergy sufferers should keep in mind. 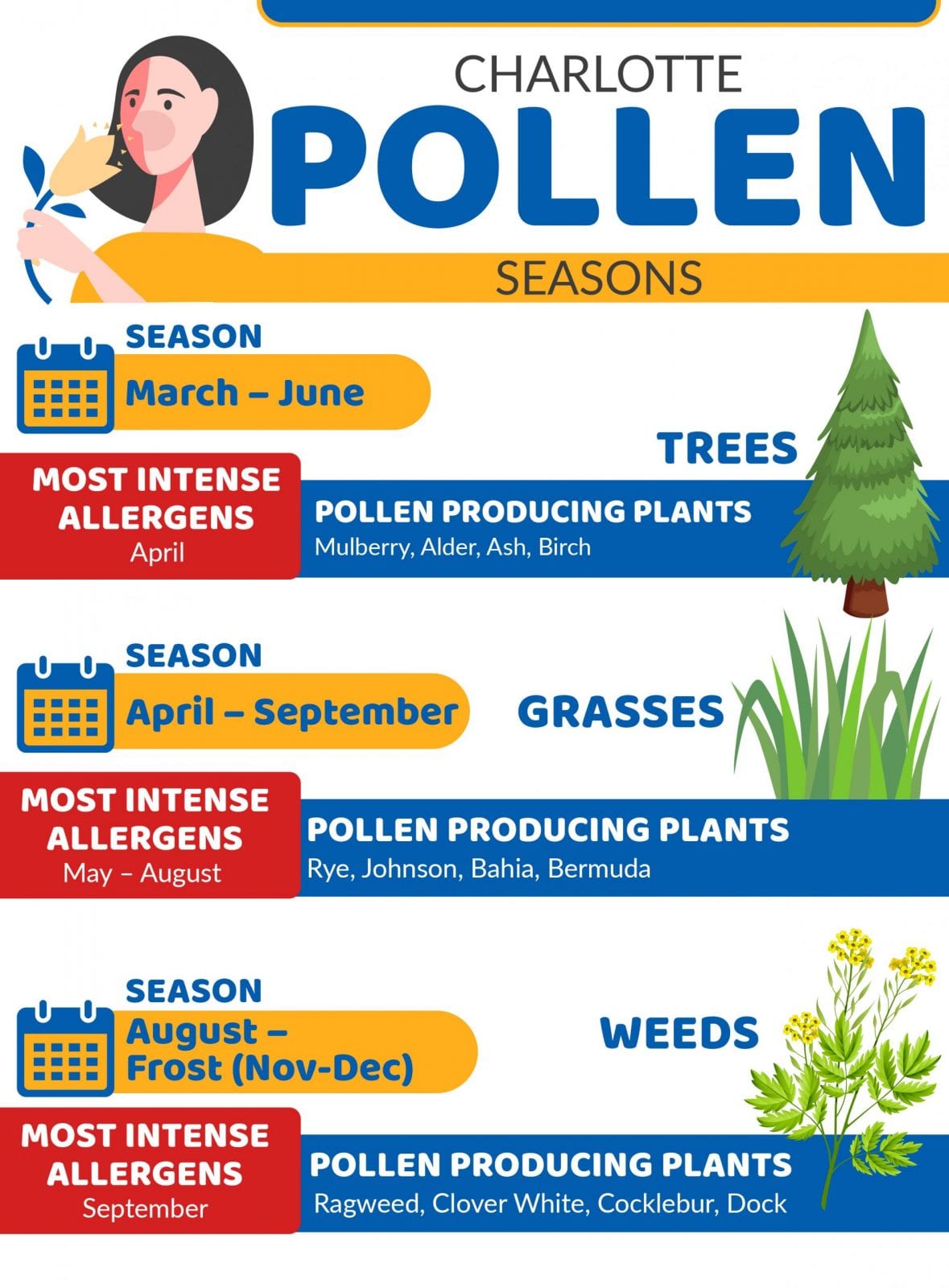 Types of Pollen in Charlotte and Their Seasons

In the Charlotte area, there are three common types of pollen that will affect you during the pollen season, causing different allergy symptoms: weed pollen, grass pollen, and tree pollen.

Weed pollen most affects allergy sufferers from August through November or December.

Of all the weed pollens, the best-known one is ragweed – as evidenced by the high number of ragweed allergies discussed earlier. Common throughout the midwestern and eastern United States as well as other parts of the country, ragweed pollen does typically have a short season. However, for each ragweed plant, a billion grains of pollen can be produced. That means ragweed has a lasting effect long after the plant is gone.

Rural parts of Charlotte are most susceptible to ragweed, as this is where the plant grows most. That said, in atmospheric conditions, ragweed can travel up to 400 miles.

If you have been diagnosed with a ragweed allergy, it’s important to limit your outdoor time during ragweed season, especially between 10 a.m. to 3 p.m. on days when it’s not raining. Stay away from fields, vacant lots, riverbanks, roadsides, around farms, and on turf grasses, as ragweed may propagate here as well.

In Charlotte, there are several predominant grass types: Bermuda grass at 15 percent, tall fescue grass at 80 percent, and five percent of a mix of centipede, ryegrass, Kentucky bluegrass, and zoysia grasses.

While any of the above grasses can cause allergy symptoms, with tall fescue grass, you may have a lesser rate of allergies. This is due to how these plants produce pollen, as they have to grow to at least 12 inches before they produce allergen-causing pollen in meaningful amounts. That can give you a longer period of relief.

Like ragweed pollens Grass pollens historically first appear in Charlotte in March, spiking in April and May. The pollen counts then recede for the summer and drop even further by September and October.

The texture of tree pollen is different from other pollen types in that it’s quite fine. Since it weighs less, it can often travel farther.

There are certain tree species that could produce more pollen that cause your allergy symptoms. In North Carolina, these trees include:

Other types of common North Carolina trees that may cause allergies include:

How to Avoid Pollen Until the Season Is Over

Whether it’s ragweed, grass, or tree pollens that trigger your symptoms, how do you safeguard yourself from allergy attacks this spring and summer? There are several ways you can go about it.

The first way is to keep track of the pollen count. CAAC has the only official pollen counter for our area. Our trained staff daily identifies specific pollens in the air and it is posted on our website. Knowing your specific allergy triggers and comparing them to the daily pollen count can help you plan your day.

To be on the safe side, you might want to limit your outdoor activities on days with higher pollen counts. Otherwise, you’re risking exacerbating your symptoms. If you absolutely must go outside, then see an allergist before pollen counts get too high in Charlotte. This way, you can get the medication you need to prevent or treat symptoms as they occur.

You should also be smart about what times you go outside. Pollen will start falling and spreading in the air sometime at 5 a.m. to about 10 a.m. Going outside in the morning (again, if you can help it) is probably not within your best interest. Plan outdoor activities for later in the afternoon or even early in the evening. It tends to stay lighter longer in the summer, so you can still enjoy fun in the sun.

If you want to take charge of your allergies this spring and summer, consider visiting Carolina Asthma & Allergy Center. We have a dozen offices across Charlotte and beyond. We provide care for all kinds of allergies, not just pollen. Other conditions you can receive treatment for are latex insensitivities, allergic skin disorders, sinus disease, insect allergies, drug allergies, food allergies, allergic rhinitis, and anaphylaxis. If you need more information or want to set up an appointment, contact us at Carolina Asthma & Allergy Center today.

Can Allergies Be Cured?

Many times when we receive a diagnosis we are given medications which can help our body heal and, with time, we are sometimes cured. Yet allergy medications work only for symptom control....
Read More 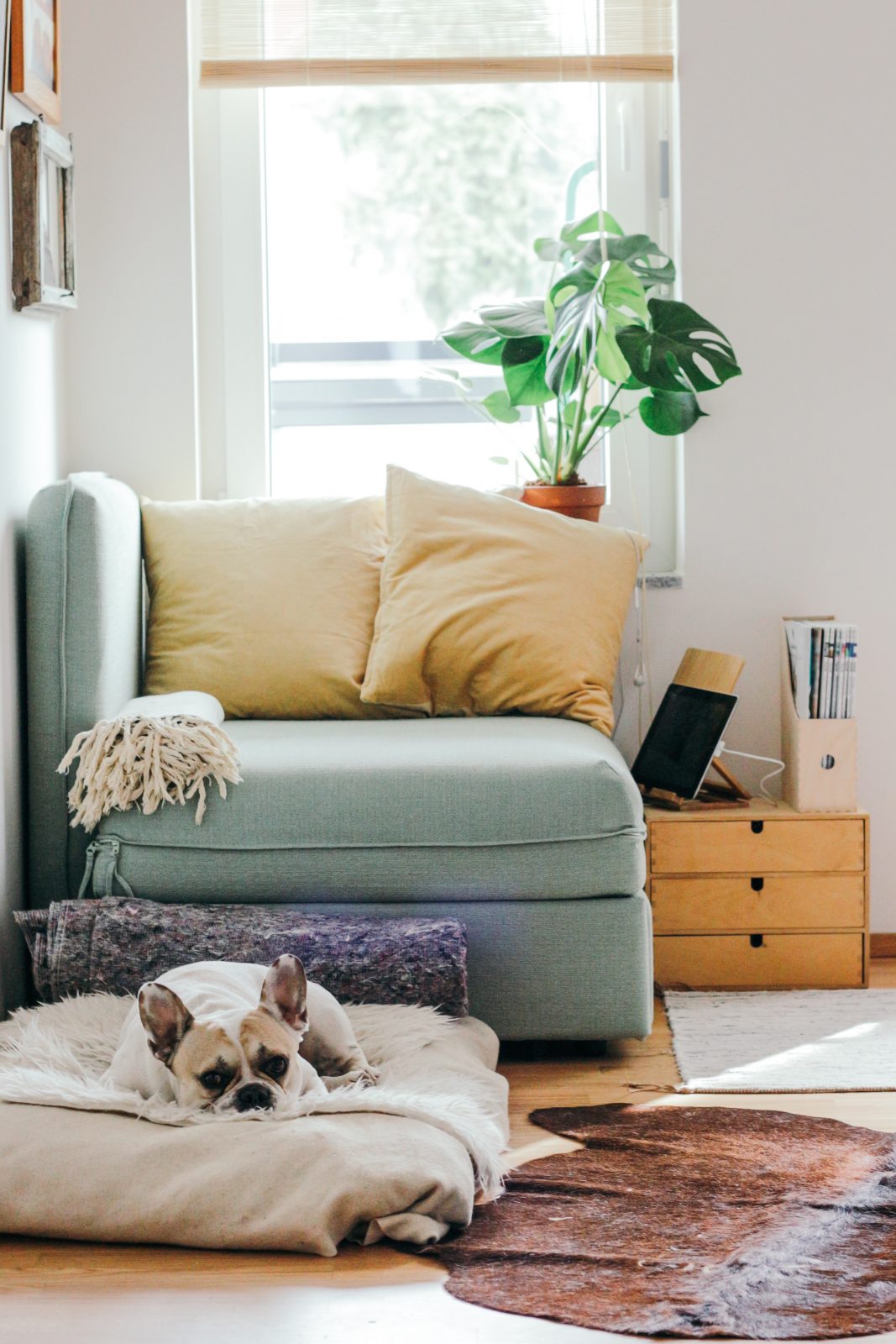 Tips to Allergy Proof Your Home

Did you know there are steps you can take to reduce allergens in your own home? Live more comfortably by taking the steps below to reduce mold, dust, pollen, or other allergies...
Read More

Please note: Due to healthcare privacy laws, we cannot answer any questions pertaining to personal health information by e-mail.